A few weeks ago I was picking black currant from the two bushes in my garden. Branch by branch was done.  When I worked myself around that bush I noticed that there are still many berries on branches I thought I already emptied completely.  This happened quite a few times.  They were hidden behind leaves and I couldn’t see them from the angle I was standing at the moment I was picking them although I had checked under the leaves.

I stopped for a moment because the analogy amazed me. How many times are we standing at a point in our lives and even though we are looking at possibilities, trying to be open for signs we cannot find a solution for a specific problem? Those are the times when we can begin to believe that the way it is right then is the way it is meant to be for us: No option, that’s it, get used to it and conform! And how many times were we proved wrong? Because unexpectedly something happened or showed up which was actually exactly what we were looking for. Maybe it was the solution we needed or something came into our lives which was even better than what we tried to find before. The reason is pretty simple: Once I resign, I let go AND… I move on. This literally has an effect because in moving we change the place we are standing at. When I look around me now, my surrounding is different and even the angle I look at the former issue is a different one. 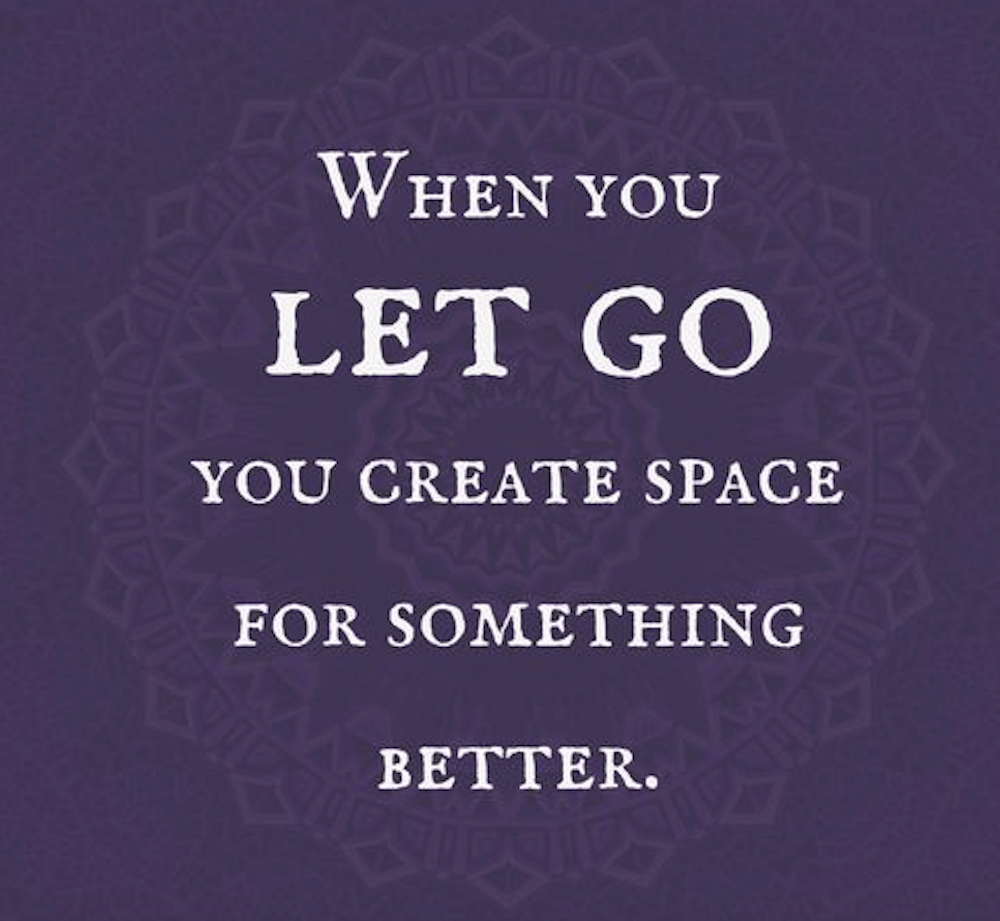 This reminds me of a story from a dear friend. She met someone on the internet and it was like love at first sight. Both were on fire instantly. Like her, he had been looking for his one true love desperately. They already made plans for a meeting but after only two weeks he got scared and pulled back. She was devastated. She was like addicted to him and desperately tried to find ways of convincing him that there was no hurry and that she would be waiting for him. But he wordlessly disappeared without her telling what the real reason was. She could only think of how to fix this because she was convinced that she will never be able to love anyone anymore. It was him or no one. After about 4 months she could not take this anymore and made the decision to cut the cord and let go. Once she decided that by herself, independently of his explanation, she felt finally free. She was thankful for the life she had and that the dark and suffocating feelings, the fight, the desperation which was eating her up inside, eventually was over. She moved on, opened up her scope of view … and then it happened. All of a sudden she saw someone who had been by her side for a while already but she was blind before to see those eyes. This is years ago but they are still together and more in love than on the day they met.

It depends on what we really want. In fact, she wanted to find her true love but she was too focused on looking at fixing the situation she was in. Sometimes it is better to stop digging deeper into the detail but moving a step backward and looking at the bigger picture. Perhaps the detail is not what we really want OR what is really meant for us. When we feel like we get stuck in a situation or when our plans don’t seem to progress we need to recall what the real goal is. Therefore we need to ignore the ego to be not too focused on a particular path but making clear we are going for the right goal. All streets lead to Rome, right? It is of no use to stick to one particular way, trying it over and over again. Maybe it is due to ignorance, stubbornness or pride or because of the fact that “it was always done this way…” A person who is focused on the goal is open to looking at all options to reach that goal. Otherwise, it is not the goal but perhaps even the person themselves which is in the center of their attention. Only different angles lead to solutions. Because then the focus is on the solution and not on the problem. When I want to progress with my work I need to improve my own skills and expand my mind.

Letting go goes along with the ability to change the perspective. This counts for relationships as well as for any other life situation. Looking at something from several angels shows opportunities and ways, gives insights and leads to solutions. Nothing you are going for is ridiculous, unreasonable or in vain. There is always a reason why you feel like achieving or finding something. So when you find yourself on a dead-end then make sure what you really pursue and keep in mind that God has only three answers:

Very true points that you make!! If only we can remember that when we find it so hard to let go!

Exactly! That is when we need to remember and have the strength to apply what we know. As you said, not so easy when it is getting serious.