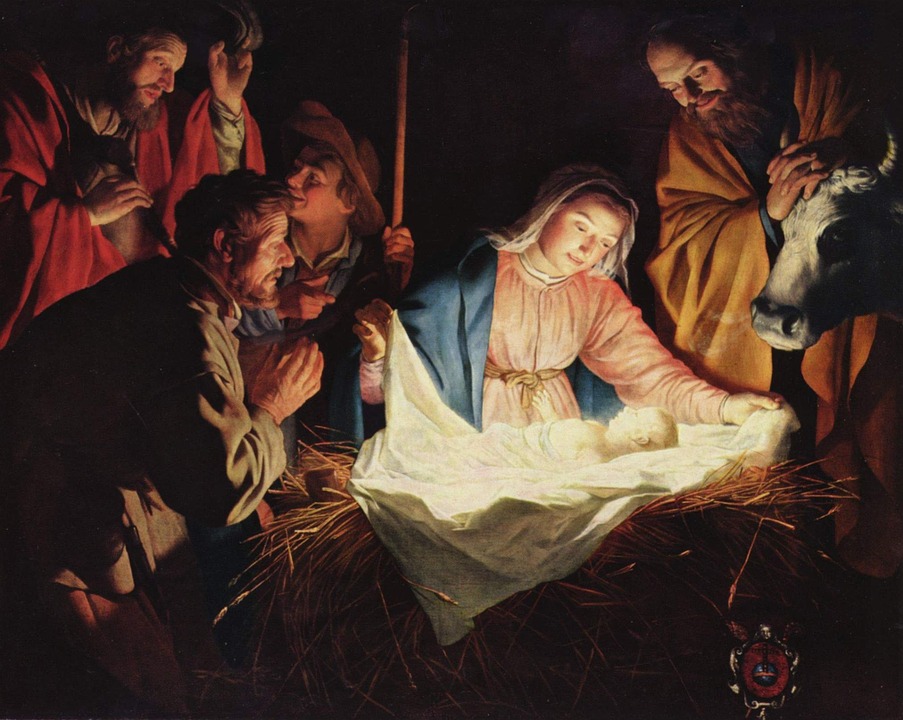 Over here, we are celebrating Christmas already in the evening of the 24th when the “Christkind” (Christ Child) brings the presents. Before I start explaining I let Wikipedia tell you about the Christ Child:

Promulgated by Martin Luther at the Protestant Reformation in 16th–17th-century Europe, many Protestants adopted this gift bringer, the Christ Child or Christkindl, and the date of giving gifts changed from December 6 to Christmas Eve.[1] As such, the “Lutheran Church promoted Christ as the children’s gift-giver, hoping to draw attention to the child for whom Christmas was named.”[2] The Christkind was adopted in Catholic areas of Germany during the 19th century.[3] To this date, the Christkindl “remains the main gift bringer in many Catholic countries in Latin America.”[4]

The Christkind is a sprite-like child, usually depicted with blond hair and angelic wings.[5] Martin Luther intended it to be a reference to the incarnation of Jesus as an infant (see Christ Child). Sometimes the Christ Child is, instead of the infant Jesus, interpreted as a specific angel bringing the presents, as it appears in some processions together with an image of little Jesus Christ. Later, the Christkind was said to make rounds delivering gifts with St. Nicholas.[6]

Children never see the Christkind in person, and parents tell them that Christkind will not come and bring presents if they are curious and try to spot it. The family enters the living room, where the Christmas tree has been put up, for the opening of presents (the Bescherung), when the parents say that they think that the Christkind who has brought the presents has now left again. In some traditions, the departure is announced by the ringing of a small bell, which the parents pretend to have heard of which is secretly done by one of the adults in the family.

Now you know better about the Christmas tradition in Austria, Switzerland, Germany, and Liechtenstein, and many other countries. That is the reason why I am already wishing you a very happy Christmas with one of the most beautiful songs performed by a great singer.

One of the most beautiful Christmas songs ever Erika. My first Christmas after marrying and moving to Germany we celebrated Chrismas Eve with our landlord and lady, The Dietrich’s, an experience I will never forget (even at eighteen, I remember so clearly. Their tree hadl lit tiny candles on it ( I worried about fire but it was ok). Any way it was like a dream and I can relate to your beautiful description of Christmas in these lands. I enjoyed it very much! 💝

Wonderful memories you are sharing here, Holly. Yes, traditionally we have real candles on the tree. We used to have only those only some years ago but meanwhile most trees have both and more and more changed to bulbs. But whenever I smell blown out candles it reminds me of Christmas when we were opening the presents and the candles were extinguisehd when the burned down.
Did you adapt anything from your German Christmas memories?

Having married a German, yes. I’m of Welch descent , we too opened gifts on Christmas Eve, but Santa was a Christmas morning thing.

Very cool! This makes your Christmas even more special. Since we lived in the US too we adapted some US traditions too for over here as long as the kids were small. It was lovely!

Great choice, Erika! Merry Christmas! Its the first real day, so i am hopefully not to late. 😉 Michael

Haha! I haven’t been here for 3 days, so No, you are definitely not too late 😊

Thank you, Erika! This answer is very kind of you. 🙂

Thank you and have a Merry Christmas yourself, Joy 💖